A wide variety of little boxes and their jingle overhangs,manufactured in Anotolian popular jewelry as "silver lucky charm" have gained completely the form of ornament.These constitute a remarkable part of  our silver workmanship.The bigger is called "amulet"and it is hung with a long chain from the neck to the side.The amulets bearing 12 stones are worn rather by jews.Talisman boxes are smaller and traditionally triangular : because the talisman inside it,is folded three times.Some of talisman boxes have cylinder shape.Many of them have further hanging ornaments secured with silver chains again.These make a sound as they move.Another tradition,which valorizes the lucky charm as ornament is the Maachallah.Our society makes the wish "Maachallah",no evil eye shall attack Inchallah for especially new born children,new married couples,new purchase property or expensive commodity.Then an ornament with scared verses inscribed or simply the "maachallah" wish on it shall be hung.This tradion is performed widely throughout Turkey starting with rural region and most times gold ornaments are hung.Sometimes a blue bad is added to the ornament.Silver ornaments in the shape of a hand with five fingers open exist in all Islamic countries and it is used as a lucky charm.These ornaments are called "the hand of mother Fatma" in Turkey and they are identified with the expression "my five fingers to your eyes" referring to the lucky charm.The Arabs are calling it "hamsa" .As for the horse shoe they are attached with blue beads on the door of the houses in some regions and to the neck of animals in some other regions.Some circles interpret horse shoe as a brow imprisoning eye within itself.Bells with either beads or not should be noted among the ornaments hung on animals.
Posted by Effe Silver at 1:40 PM No comments:

Many measures in magic sphere have been taken against whammy.There are different practices in different societies.Lead casting is one of them.Since in whammies,the question is being struck rather by a  blue eye,blue stones and beads are thought to be a remedy,a power against it or pushing power.In many places horseshoes and eggshell were used against whammy.However,it was believed that the most efficient power must come from religious items and contents to find a remedy against whammy,therefore our society used to inscribe verses and maxims from holly books on things like paper or linoleum,which were then folded diminished in order to be hanged as talismans.Talisman tradition is widely used even today and they are hung not only on people but also on commodities,houses and animals,which are loved and feared to attire whammy. 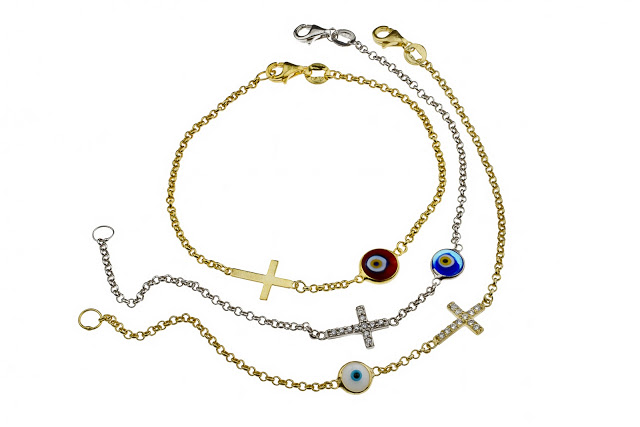 Posted by Effe Silver at 1:32 PM No comments:

Blue is the easiest colour for the bead maker to obtain deliberately.In fact,variations in the temperature or other features of the furnace,such as variations in the supply of oxygen and the rate of cooling have little effect on this pigment,which generally provides the same tone.This is the easiest tint to obtain in a glass workshop as glass turns blue from light green of its own accord,given certain conditions.Cobalt oxide which is what gives a blue tint,is found in a number of structures in its natural form.However it is used,the same blue tone emerges in the end product.In other words,any modifier with cobalt in it will act as a colourant,turning the glass bead blue.Cobalt oxide appears black in its raw state ,turning blue as glass.Variations in the capacity of the glass maker's furnace,temperature,the level of oxygen in the firing,the speed of cooling and other similar factors in no way alter the tone of blue which we see in the finished bead.
In fact,bue being such an easy tone to obtain,it was a kind of tester for glass technology,and it explains,to some extent,the relationship between its use in making of glass beads and the widely held belief's concerning blue,the sky color. 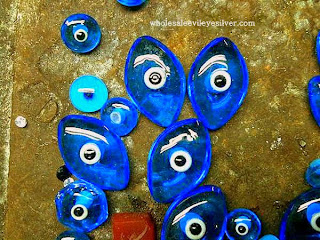 Posted by Effe Silver at 5:28 PM No comments:

Ancient evil eye glass beads and how they were made ?

The first glass beads were made as cheap substitutes for precious stones,which could be polished,cut shaped and pierced but only with great difficulty,given the technical limitations of the jeweller's art at the time.
Glass beads were often startlingly attractive as substitute gems despite the apparent simplicity of their technique.In addition they had the advantage of being finished to the final decorative touches in one technical stroke.How were the earliest vitreous evil eye beads made? it is widely believed that they were built up on a core of baked clay,which was rolled in a vitreous glaze and fired on small stands until the glaze hardened like glass.
In this case it is probable that glass beads were manufactured wherever ores were smelted and clay fired.Indeed they were widely made and used throughout the ancient world from Mesopotamia to Egypt,Phoenicia to Iran,India to many parts of Africa,China and Japan to Europe and throughout the Mediterranean to various parts of the Americas.
The appearance of these beads was extremly varied,indeed,it is almost impossible to find two alike ,and yet the vast range of techniques and types can be rendered down to a few basic technical principles.

Posted by Effe Silver at 3:43 PM No comments: